A Look into Hdac with Dae-Sun Chung

*The following is the English translation of the above article.
*以下是上述文章的中文翻译。
*以下は、上記の記事の日本語翻訳です。

[Exclusive Interview] Dae-Sun Chung, the grandson of the founder of Hyundai Group who successfully completed the largest ICO last year, said, “We will provide a role model for blockchain ecosystem with native coins.”

The largest ICO of previous year is an acknowledgement of our own technologies. After the ICO evaluation in Switzerland, he plans to form technology communities per industry. “We will develop a hybrid of public and private blockchains,” “We may fall behind in the blockchain market, therefore loosening regulations is desperately needed, such as regulatory sandbox.”

Hdac Technology, led by Dae-Sun Chung, the CEO of Hyundai BS&C and the grandson of the founder of Hyundai Group, has set out to build the next generation blockchain platform and ecosystem by showing off Hdac Mainnet, the IoT blockchain.

Chung said in his exclusive interview with Newsis on the fifth, “I would like to present a role model for blockchain ecosystem by changing the negative views toward the existing cryptocurrency market on behalf of the native coins. We will form technology communities per industry after completion of the ICO evaluations by the Swiss financial authorities.”

Chung appeared in front of the media 10 years after the establishment of his company in 2008 and introduced the process of the proposed business and commercialization of services last year through the white paper (business plan) and emphasized that he would expand support of infrastructure and cooperation for promoting blockchain.

Hdac supports IoT and M2M (machine-to-machine) communication through its own blockchain platform. It would be used in various aspects of our daily lives in the future such as smart homes, smart campuses, smart factories, etc.

Hyundai BS&C is a specialized construction and IT service company, providing construction, plant business, system integration, IT outsourcing, IT consulting services, etc. Although this is an unprecedented business structure for a blockchain company, some evaluate it as a favorable structure, having its own market to apply the actual blockchain technology.

“We started off as an IT company and added construction in accordance with the will of my father, but we started paying attention to IoT as a technology combining the values of IT and construction. We learned about blockchain while trying to find solutions for security in providing such services,” Chung explained.

The distributed ledger blockchain can prevent operation of IoT devices or manipulation or illegal collection of data by third parties.

In particular, the business of applying blockchain to HERIOT, the smart home industry, has had some progress. It has gone through the first step to a proof of concept and it is aiming for IoT contract operation at the second half of this year. IoT contract means enabling numerous IoT devices to agree on trust-based procedures and realizing safe service scenarios.

Chung said, “Our plan is to upgrade Heriot to a state-of-the-art, high-end residential space through IoT solutions developed by our construction sector and IT sector. We are planning to apply the IoT contracts to Samsong Heriot Apartments, which are currently under construction.”

Based on such visions, Chung established a blockchain company, Hdac Technology AG, in Zug, Switzerland, last year. With three free sales in March, May and July last year and through Initial Coin Offering (ICO) in December, Hdac coins collected the largest size of funds among native coins.

Hdac Technology has submitted administrative documentation in accordance with ICO Guidelines issued by the Swiss financial authorities (FINMA) and is currently undergoing procedures to comply with the local government’s regulations. FINMA is in the process of confirming the future possibilities of Hdac technologies, KYC (Know-Your-Customers) of ICO investors, and whether AMLA (Anti-money laundering) procedures have been duly followed. Hdac has already obtained certification on AMLA.

In looking back, Chung said, “We were planning to go to Switzerland even before regulations by our government had existed. We were full of desire to learn from Zug as it had been receiving global attention as a Crypto Valley.” He also added, “I have pride in our technologies. We opened Mainnet with our own platform, not Bitcoin or Ethereum. Of course, the brand Hyundai probably had some effect, but people will eventually acknowledge us as the technologies are evaluated.”

Hdac has established a complete decentralized system through opening Mainnet. While maintaining the nature of public blockchain such as certification, dispersion, and combining the strengths of private blockchain such as processing speed, they are planning to add specialized functions in the previous industries such as construction, heavy industry, distribution industry, etc. By searching the methods in which industry application technologies can have synergy through public and private ecosystems, they have a plan to survive in the blockchain market.

“Having Hdac Technology in the center, with Hyundai BS&C (Young-Ju Lee, CEO) and Hyundai Pay (Byung-Cheol Kim, CEO), we are in the process of developing the Hdac platform by applying private blockchain that may be independently operated. We are planning to develop a hybrid of public and private blockchains,” he stated.

“The process of owning Hdac involves participating in the ICO or mining in the Mainnet, and the Hdac’s mining has power has been exploding. It is currently 15 teras, and Ethereum Classic is 8 teras. Since structure expansion is one of the important values of the blockchain of Mainnet, we are expecting to settle in early,” he said.

Chung is cautious of the views that simply regard Hdac as a cryptocurrency. It is because cryptocurrency is only one part of Hdac, and it is aiming to become the model for building its own ecosystem through its own blockchain platform. This is why they are focusing on protecting market participants and promotion their business.

He proclaimed, “The blockchain ecosystem is a domain that participants make and we will make efforts in showing technologies that are above the white paper for the market participants.”

Regarding the government, he emphasized that in order to preoccupy the market, loosening regulations are necessary, such as implementing a regulatory sandbox. He said he is gravely concerned with the possibility that Korea may be alienated from blockchain technologies and will lead to an industrial convergence. In Hdac’s case, they started trying industrial applications because P2P (peer-to-peer) payments, micropayments O2O (online-to-offline) services were difficult to be implemented due to ambiguity in related laws.

Chung emphasized, “In the Fourth Industrial Revolution, we already lost the initiative in AI or big data to other countries. Blockchain is still in good shape and suits our culture very well. The government should draw an outline based on the creation of jobs and sound industry development.” 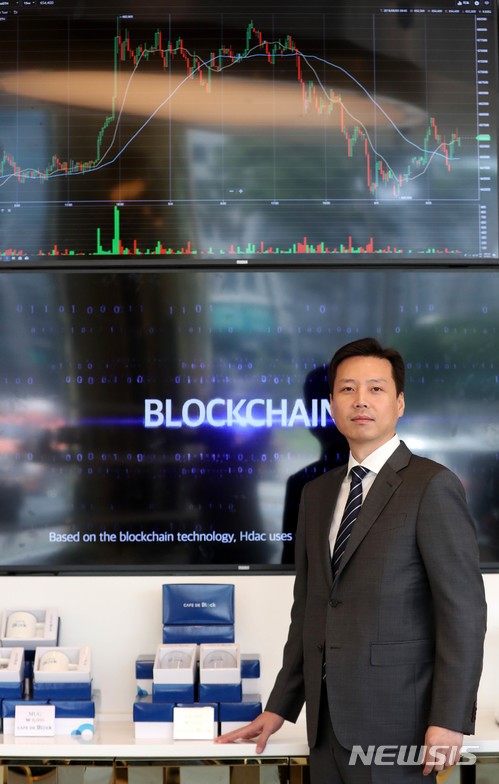